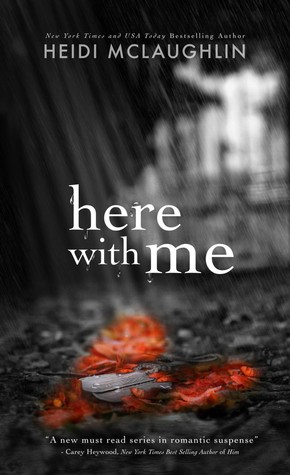 Ryley Clarke has grown up with the military in her blood, with both parents serving their country. Ryley knows the risks of being married to the military. But when the unthinkable happens, and her future husband is killed in action, Ryley can barely survive... until Evan's twin brother, Nate, helps her pick up the pieces.

After serving on a special mission with the military for six years, Evan Archer returns home to find the unthinkable - the love of his life, Ryley Clarke - engaged to his brother, Nate. With Nate on deployment, Evan needs to figure out what happened in his absence, and more importantly, how to win Ryley back from the man he once considered his best friend, but now thinks of as his rival.

A struggle between twin brothers, between first love and yearning for closure is the premise of Heidi McLaughlin's, Archer Brothers series.  In the first book, Here with Me, we get a look at the heart of the problem.  The desolation and heartbreak of the loss of a loved one leaves a family in ruins trying to sift through the broken pieces and rebuild their lives. The intensity, longing, struggle, passion and love play just a small part of what this story really entails.  The characters seized my heart while sending me on a journey of discovery and purpose.

Ryley Clarke has loved only one man with her whole heart.  But that love was ripped away from her when she received word from the Navy that her fiancé, Evan Archer was killed on duty.  Her whole world fell apart with the loss of her first love and destroyed her heart.  Ryley didn't think she could ever or would ever recover from this horrible tragedy.  In the most unlikely way, her heart begins to mend with the help of Evan's twin brother, Nate.  Everything goes to hell however, when Evan returns from the dead.  Ryley is now faced with a gut wrenching dilemma that even she does not know how to handle.

Evan Archer left his fiancé and shipped out five long years ago on a deep cover operation.  He was serving his country like his father and his twin brother.  He thought that his girl was waiting for him back home with his son and his family.  Never in his wildest dreams did he think he would come home to find his brother taking his place, with his Ryley and his son.

I found myself drawn into this story through the anguish that Ryley Clarke and the Archer family were facing. It seized me to my core and refused to let go.  This book left me breathless, feeling hopeless and hurting, yet at the same time I wanted more.  I can't wait to read the next installment and find out what will happen to our star crossed lovers.