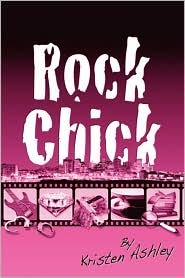 Indy Savage, cop's daughter, rock chick and used bookstore owner, has been in love with Lee Nightingale, once bad boy, now the man behind Nightingale Investigations, since she was five years old. No matter what ingenious schemes Indy used to capture his attention, Lee never showed an interest and Indy finally gave up. Now Indy's employee, Rosie, has lost a bag of diamonds and bad guys are shooting at him. When Indy gets involved, Lee is forced to help. Complicating matters, Lee has decided he's interested, Indy's decided she's not. But she can't seem to keep Lee out of her life when she's repeatedly stun gunned, kidnapped and there are car bombs exploding (not to mention she's finding dead bodies).

Indy's best bet is to solve the mystery of the diamonds before Lee. Lee's challenge is to keep Indy alive and, at the same time, win back her heart.

While strolling through my Kindle library I came across one of my all-time favorite rereads, Rock Chick by author Kristen Ashley and decided to take it out for another read!  Rock and Roll forever is the Rock Chick’s anthem and in this amazing book you are introduced to a forever Rock Chick and her bad a$$ boyfriend!  If you are ready to laugh, say what and have a good time, then you need to pick this book up and rock on in.

What do you do when you are a wild child and your dad is a cop?  You jump on life and live it to the fullest. That is the way Indy Savage lives her life with no regrets except one, Lee Nightingale!  Her family and Lee’s have been best friends forever and she grew up with Lee and his siblings.  Indy has crushed on Lee for years and finally at the age of twenty stopped throwing herself at him.  Now at the ripe old age of thirty she needs his help…someone is shooting at her with real bullets!

Lee has his own PI Agency and is known far and wide as a guy you don’t mess with.  When Indy goes to him in trouble, he decides it is time to stake his claim.  But is she really worth all the trouble that follows her around?  Life will never be normal with Indy in the picture.

Bad guys want her, friends are up in her business and oh yeah, she not adverse to BAE!  What’s a guy to do that tries to stay on the right side of the law?  That’s right claim that Rock Chick for your own!

Buy Links:  Amazon US/Barnes and Noble
Posted by Anonymous at 6:45:00 AM