Review: The Last One by Tawdra Kandle 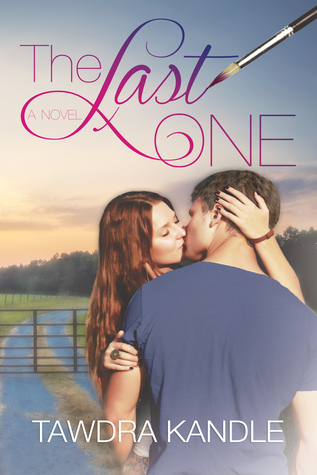 Meghan Hawthorne is restless. The last year has been a roller coaster: her widowed mother just married a long-time family friend. Her younger brother unexpectedly became a father and a husband. Everyone's life is changing. . .except for hers. As she begins her final summer of college, Meghan's looking for excitement and maybe a little romance. Nothing serious; this girl just wants to have fun.

But the only man for Meghan turns out to be the last one she expects.

Sam Reynolds doesn't need excitement, and he doesn't want romance. Fun is out of the question. He's been the steady, responsible one since his parents were killed, and serious is his way of life.

When Sam rescues Meghan alongside a dark Georgia backroad, she falls hard for his deep brown eyes and slow drawl. But making him see her as more than just a party girl won't be easy. Sam's tempted by the fiery young artist, even as he realizes that giving into his feelings will mean radical change. . .maybe more than he can handle.

Nobody ever said love was simple.

Life is constantly moving and changing and the one thing you can count on is that nothing stays the same.  This is the story of two people that meet at a changing point in their lives.  Decisions will be made to either face those changes head on or stay in that comfortable zone and remain stagnant allowing life to pass by unchallenged.

Sam had pulled over to help the stranded woman on the side of the deserted country road when he realized she was not alone and her friend was in no condition to help. From the moment Sam saw a passed out Meghan in the front seat of the broken down vehicle he was captured.    He towed their car back to town, arranged for them to have it fixed and used a loaner to get them back home to Savannah.  Sam thought that would be the last time he laid eyes on Meghan but fate had something else in mind.  The second time he saw her was when she returned to get her car from the repair shop and once again sparks flew between them.   He really didn’t have time for the feelings he felt for her and the way he couldn’t seem to stop thinking about her.  Feeling like a total idiot for telling her she needed to be more responsible and not drink so much, he really thought that would be the last time he would ever see of her.  But once again he was so wrong.

Meghan could not remember much about what had happened the night she went out with her friend to dance and have drinks.  The only thing that she could remember was a pair of brown eyes that seemed to see right into her soul.  When she meets the owner of those eyes she is pulled to him like no one she has ever met before and he lectures her about her night out!  Thinking that they will never see each other again, Meghan is surprised when the program she has signed up for through the college for volunteers to teach art assigns her to the town where she had met Sam.  When Meghan arrives at the home of the family that will hosting her for the summer she is amazed to find Sam is part of that family.

Will the two be able to withstand their need for one another?  Can Sam put aside his preconceived ideas of Meghan?  Read this novel and find out about Meghan and Sam’s journey to find their HEA!

Would I recommend this book: Yes! This is a beautifully written story of two people finding true love and their journey to overcome the roadblocks in their way.  It has sizzling sex and a unique look at courtship, country style.

Would I recommend this author: Yes! Tawdra Kandle writes from a refreshing standpoint about the struggles that some couples experience in their quest to find where they belong.  I look forward to reading the next in book in this series.