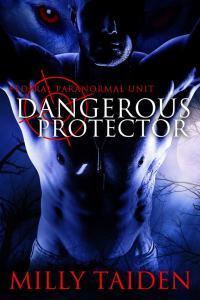 If you run from love, you're asking for a chase...

James Brock lived the past ten years without the woman he loves. Using his job as head of the Federal Paranormal Unit to help others, he's done a good job of ignoring his lack of a personal life until she returns. His salvation. His first love.

Cynthia Vega had a very good reason to leave the only man she loved after she'd accepted his marriage proposal. Now she's back as his boss. And he's not willing to ignore their chemistry or the past.

Brock is determined to claim his mate and prove that their passion is even hotter than before. He wants her and her explanation behind their separation. Except, some secrets won't stay buried in the past. Brock will fight his demons to follow her lead, but Cynthia's reluctance to explain their lost love may be the one key to their destruction...

This is the second book in Milly Taiden’s Federal Paranormal Unit.  It is a reaffirmation of how the shifter/paranormal world really works when mates are involved.  This is Brock and Cyn’s story of love lost and then found and the really smoking hot path they travel!

Cynthia Vega has recently accepted an appointment as head of the Federal Paranormal Unit.  The only problem with that is the man that she will now be working with is her one true mate and love, James Brock. It has been years since she walked away from him, but she has always known where he was.  It had almost broken her when she left him; her only consolation was that she was protecting him. Fate has brought them together again and she doesn’t know if she can keep it professional or if she will succumb to the feelings she will always have for him.

She was his mate and he would never love anyone else.  He could not understand how she walked away from the love they shared.  Brock was determined that she would not walk away again.  Cyn was back in his life and he would not let her go again.  They have a job to do.  He will help her find her missing niece and she would tell him why she left him.  Will he be able to protect his mate?  Can she trust him enough to share her feelings and her heart?  Time is on his side, he will succeed.

Would I recommend this author: Yes! Milly Taiden continues to amaze me with her imagination and insightful expression of how love really works.  This is a remarkable series that will have you waiting impatiently for the next one to be released!