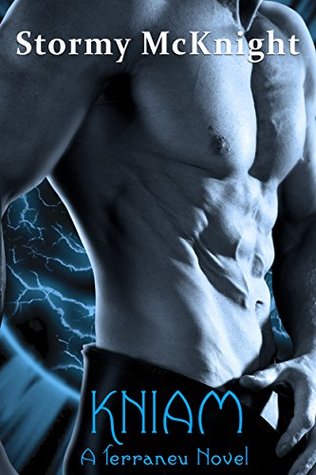 Amber- After a bitter divorce and looking over her shoulder at mid-life, Amber decides to throw caution to the wind and take a once in a lifetime trip to the Scottish Highlands. She wasn't expecting to stumble and fall down a hillside, land on a long lost portal to an alien world and end up in a cage.

Kniam- He is of an ancient race on the brink of extinction. A man of honor and duty, his only purpose is to serve and protect what remains of his people. Until one angry Earth female changes everything! Can he be the leader his people expect, and have the female his heart covets and his body burns for?

Would you want a second chance to live your life over?  This is the first book in Stormy McKnight’s Terraneu series and it is worth the read!  Ms. McKnight takes her readers to a brave new world that is inhabited with males only! It tells the story of a woman that is changes forever when she accidentally stumbles into this world.
Amber is a middle age woman that has decided to live life to its fullest!  After her divorce she takes off on an extended vacation to Scotland hoping to find someone to have some fun with.  So when she goes for a walk, falls off of a hill and ends up on a teleportation pad, what’s a girl to do?  Try to deny that she is being sucked into another place other than Earth of course!  When Amber wakes up she realizes she is not in Kansas anymore!  She is caged and traded by giant people to a really hot alien that doesn’t realize that she is a woman and not a primate!  Where did this guy come from?  When she is knocked out and wakes up the fun really starts.  She is on a planet of only men and she is the first woman they have ever seen.Kniam is a member of the ruling council for his people.  He is the Leader of the council and was off world when he procured the crazy primate with the smelly fur! When the primate attacked him, he defended himself and thought he had killed it.  He had placed the remains in a disposal unit, but when he returned he found a being that he was instantly attracted to! This was a being unlike any he had ever come across before.  What is even more amazing is that now the creature can communicate with him and understands.  What is this creature?  Why is his body reacting like it is?  Is it diseased? Did it infect him?Let the fun begin!  From this point on it is sexy, funny and filled with lots of instruction on males and females interaction!  There are also some bad guys that want to keep their world the way it is and not polluted with the presence of females! Hero: Kniam 4 starsHeroine: Amber 4 starsPlot:  4 starsSteam Level:  4 starsCliffhanger:  NoWould I recommend this book:  Yes. This is a fantastic SciFi read that will keep you entertain as you read! It has hot sizzling sex between an innocent alien and a woman that is willing to do all the instructing he needs to learn! Would I recommend this author:  Yes. Ms. McKnight has a new fan…me!  Love her books and cannot wait to see where she will take me next!

***Received an ARC of this book from the Author in exchange for an honest review***
Posted by Anonymous at 6:45:00 AM