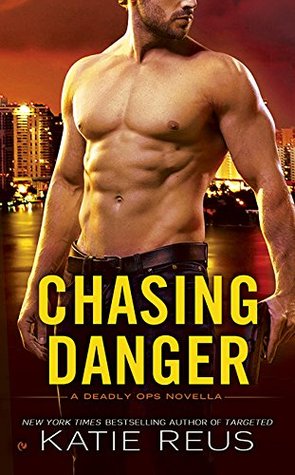 From the New York Times bestselling author of Bound to Danger, a tale of a woman in danger and the one man who will keep her safe at all costs...

Chief Nursing Officer Hannah Young is accustomed to working under pressure, but even she’s still reeling in the aftermath of a horrific terrorist attack on Miami. And things only get worse after a knife wielding maniac tries to kill her. Desperate for help, Hannah must turn to the one man she never thought she’d see again.

After spending an intensely passionate night with Hannah, NSA Agent and former Delta Force operative Dax Costas fell off the face of the earth. He got called away for a two week mission with no way to contact her. Now he can’t get the smart, sexy woman out of his head. She might be angry at him, but when it appears she has a stalker, Dax moves her under his roof and into his protection.

Unfortunately, whoever wants Hannah dead will stop at nothing. And if Dax can’t identify the perpetrator in time, it could be too late to discover if there is more between him and Hannah than just heated passion…

Overall Rating:  4.5 Rockin’ ★★★★☆
When you think of those that keep our country safe you see men and women like the characters created by author Katie Reus.  In her deadly ops series, Ms. Reus shapes a world where these characters serve and protect.  Chasing Danger is the story of two amazing people that are willing to do whatever is necessary to protect each other and find a HEA.

Dax Costas is an agent for NSA. His missions are covert and often require that he disappear for periods of time without notice. After saving Hannah a year ago, he knows that he wants more from the beautiful woman.  He begins his pursuit of her and they spend a night filled with passion and a bond is formed that is undeniable.  Dax job is not easy on relationships and when he is called away and cannot call Hannah to tell her he has to go, it could be over for them before it starts.  But, Dax is not willing to take no for an answer and will follow her until she listens to him.

Working as a nurse in Miami hospital, Hannah understands pressure and commitment.  She is the head of her department and takes her job seriously.  Little did she know that she had stumbled across a situation that put a target on her back and a deadly evil on her trail.  When Hannah is attacked by a knife wielding psychopath there is only one man she can turn to, Dax. The man that had rescued her once before and saved her life.  The problem Hannah is facing is a trust issue. He left her waiting for him at a restaurant and dropped off the face of the Earth without a word.

The only time Hannah truly feels safe is when she is with Dax.  He will do anything to keep her safe and take care of the threat against her. Dax only needs to convince Hannah to give him the chance.

Would I recommend this book: Yes! Mystery with scorching sexy scenes and honor filled characters are just the tip of the iceberg in this novella.  It will make you feel like do I wave the red, white and blue or blush?