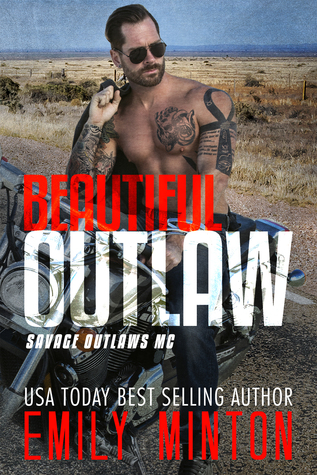 After ten years of surviving as a walking, talking, living doll, Laura feels dead inside.

She has sacrificed everything for her family, marrying a man she could never love. Her husband doesn’t beat her, doesn’t berate her. He transforms her, forcing her to live as a stand-in for his long dead wife. She stays silent as piece after piece of herself disappears, willing to do anything to protect the people she loves.

When his demands go too far, she finally tells her brother the ugly truth.

Wanting to protect her without putting the rest of their family at risk, he sends her to the one place he knows she’ll be safe. He places her into the hands of his best friend, Vice President of the Savage Outlaws MC.

Once again, she is transformed into someone new; Shay.

Bowie has spent many nights dreaming about his best friend’s little sister. The reality is so much sweeter than his dreams. He wants to be more for Shay, needs to protect her, but he’s not sure if he knows how.

Can an Outlaw show her how beautiful life should be?

From the beginning, something was very wrong with the man that demanded I become his wife!  I had no choice but to accept his proposal, my family’s lives were holding me hostage. So at the age of eighteen, I became a walking, talking doll remade in my husband’s dead wife’s image. But his last demand is too much, I cannot do it! Death would be better than this! –Laura’s POV

In this the first book in the Savage Outlaws MC series, author Emily Minton creates characters and a story that is truly remarkable.  In Beautiful Outlaw we are introduced to Bowie, the Vice President of the MC and Shay, the broken woman that he saves. This is a MC Romance but it is so much more than that!

The first time I saw her picture, I dreamed of her being mine!  Her brother, LOCK and I were friends and watched each other’s back while in the military, fighting for our country. When we returned stateside and left the service, I returned to my MC family and he became a cop but we still had each other’s back.  So when he asked me to help protect his sister from her psychotic husband, I didn’t hesitate.  I wanted her with me, in my bed, the woman of my dreams.  –Bowie’s POV

Things are never the way we think they will be! Bowie does not recognize the woman Laura has become.  He drops her off and leaves her with the only mother he has ever known, feeling like he has done his part but for some reason cannot stop thinking about her. Slowly Laura becomes Shay the new identity her brother created for her.  But evil is not so easily defeated and the life she left behind refuses to stay in the past.  Bowie also has forces moving against him that he will have to take care of to not only protect Shay but his MC family as well.

Would I recommend this book: Yes! This book has it all, heartache, love, danger and mystery.  It also includes strong alpha males that protect those they love.  If your into sizzling sex between two dominate characters, then you want be disappointed with this novel.

Would I recommend this author: Yes! I stand in awe of the amazingly gifted writer, Emily Minton. Her books are remarkable trips into worlds that she creates for her reader’s enjoyment.  Each character is so well developed that they seem to be more that words on a page, they become friends.  I cannot wait to read her next offering!