Review of Bent Not Broken (Cedar Creek, #1) by Julia Goda 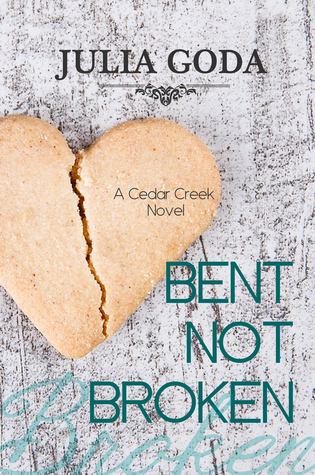 Life has taught Ivey Jones early on that with trust come pain and betrayal. Out of survival she has created walls around her to keep anyone from getting too close. Though she lives in her dream house in the Rocky Mountains and loves being the owner of the town's quirky little bookstore Serendipity, her life is narrow and governed by strict rules that she never deviates from…until Cal Bennett enters her life.

For the past nine years Calvin “Cal” Bennett has stayed away from Ivey, thinking she deserved better than to be saddled with a single dad who has never been good at relationships. Until a few chance encounters show him what he’s been missing and he can’t stay away any longer.

Little does he know he’s got a fight on his hands that he might not be equipped to win. Shadows from Ivey's past lurk in the dark, ready to strike and bring her low once and for all. But Cal swears he will do whatever it takes to break through that wall of steel to win Ivey’s heart and keep her safe.

Overall Rating:  4.25 Rockin’ ★★★★
Overwhelming pain, agony and betrayal are the focus for the main characters in this beautifully written and well developed novel by Julia Goda.  In Ms. Goda’s debut novel, we are introduced to Ivey and Cal, two souls that find a way to heal each other.  They are bent but not broken and will work together to find their HEA.

Ivey Jones spent her early childhood watching her father beat her mother and then rape her repeatedly.  When her mother checked out mentally, he turned his fist and punishment to her!  Ivey finally escaped after high school and moved away to go to college.  Free at last to be herself she lets her guard down and once more evil almost destroys her.  Escaping once again from a brutal, abusive man she puts her past behind and strikes out for a new beginning.

Ivey drives half way across the country until she comes to a small rocky mountain community.  The peace that she finds causes her to stay and put down roots. She has always wanted to own a bookstore and it seemed like fate when she saw the lease sign on the door.   Ivy buys a home and opens a business, a bookstore called Serendipity.  For nine years she has lived with walls built around her heart and soul, keeping the past in the past and not letting anyone inside.  Everything changes when Cal stakes his claim!

Cal is a single father with a son that loves to visit Ivey’s bookstore.  Since the first day he had laid eyes on her, he knew that he wanted more.  But he had his own problems to deal with and felt like it would be a burden for Ivey to take on a ready-made family.  She was beautiful, too good and didn’t need a man like him with all of his baggage.  A man can only deny what he needs for so long and then he will do whatever it takes to claim his woman. It was time to claim Ivey.

Sometimes the past refuses to stay in the past and you can never really get away from it.  Ivey’s past has come to collect and will destroy anything in its path to get what it wants!

Would I recommend this book: Yes! This book is a romance filled with kinks and suspense that will keep the reader asking what will happen next.  It has a hot hunky alpha male and a beautiful feisty heroine that will make you laugh and cry at the same time as they work together to find their HEA.

Would I recommend this author: Yes! Ms. Goda writes with heart, humor and a sense of what makes the world go round.  Her characters are created with this same sense of love and laughter.