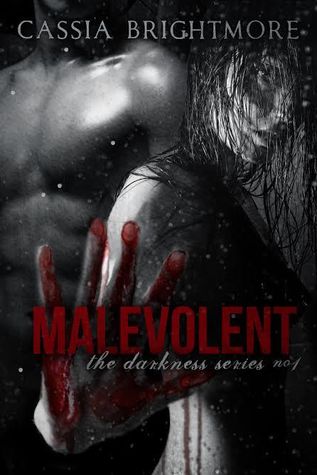 Darkness has a seductive power, a delicious energy that sinks its claws in deep. Once the devil has a hold of you, true malevolence is born.

Sheriff Brady James has sworn to protect the small town of Durham Heights, his current priority to ruthlessly hunt a sadistic killer on the loose. With lives at stake, his focus is split between two beautiful women - one dark, one light. The clock is ticking, the threat palpable; crawling closer at every turn. Once death has you in its sights, there is no escape.

Pain. Suffering. Lives shattered and broken. In the fight of good against evil, who will survive?

This is the first book in the Darkness series, a wishing evil upon others novel that can be read as a standalone.

Due to mature content and violent situations, this book is recommended for readers 18 years and up.

Overall Rating:  4.5 Rockin’ ★★★★☆
Cassia Brightmore's debut book, Malevolent, The Darkness Series, volume 1 is a mystery, thriller, and romance novel filled with so much suspense that it will leave you breathless, scared, and hurting for the characters in the story.  The author created a fictional heart stopping reality that is nothing short of chilling.  It leaves the reader with an eerie "OMG".

Gwyn Woods is running away from a life that has left her scarred physically as well as mentally. She is running from her abusive ex, a man that tried to kill her.  She happens upon a small quaint town in Louisiana called Durham Heights and decides that this is a place she will be safe in for a while.  Gwyn is in for an attraction that will rock her world when she meets the hot, sexy sheriff, Brady James.  Not only does she have a growing need for the sheriff, but she also learns there is a sinister serial killer on the loose in the small community.  A psychopath, who takes young girls and does unspeakable things before finally killing them.

Sheriff Brady James has a history with the unspeakable acts of sadistic killers.  Once a NYPD detective, he moved to Durham Heights hoping for a fresh start and an easier life.  However, when a dead body of a young girl turns up in his town, everything changes for him as he tirelessly tries to find the killer.  The one bright spot in all of this is he has met the woman of his dreams.  A woman that he wants like no other and he has to have her, protect her.  Gwyn Woods is new in town and even though he has only just met her, she consumes him.  Fighting to keep his town safe and now Gwyn as well, Brady is relentlessly wading through the evidence to catch the killer.

My interest was captured uneasily at first by this story.  I found myself drawn in by the horror and the mystery that the author generated through the eyes of the begging victims.  As the story unfolded, this thriller frightened, yet perplexed me.  I was drawn to the intensity of Sheriff Brady James, while loving the beautiful person that Gwyn Woods represented.  In the end, my heart was lightened, but still heavily saturated with sadness from the killer's mayhem and madness.  This novel was carefully crafted to arouse turmoil, while at the same time producing a beautiful love story.  I'm a fan, Cassia!  I patiently await the next part of this series.

Would I recommend this book:  Yes! This is a book that will take you to the edge of pain and suffering by the serial killer as well as enjoy an overwhelming mystery, with a splash of sexy romance.  A heroine that deserves her own HEA and a hot hero sheriff that wants to give it to her.  This thriller romance is a spellbinder.

Would I read other books by this author:  Yes! Cassia has an interesting way of writing that intrigues the reader from the moment you begin to read her book.
Posted by Anonymous at 6:30:00 AM