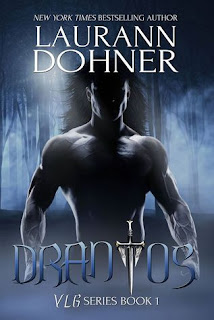 For most, a plane crash means the end of life. For Dusti Dawson, it’s just the beginning…
Dusti and her sister Batina survived the crash, thanks to a couple of brothers who are equal parts menacing and muscled. She’d be grateful…if they hadn’t turned out to be delusional kidnappers, who believe Dusti’s grandfather is some monstrous halfbreed creature bent on murder. Turns out Vampires, Lycans, and Gargoyles do exist— and they’ve been crossbreeding to form two hybrid races. Drantos, the man Dusti can’t stop lusting after, is one of the most dangerous of all.
VampLycans Drantos and Kraven were sent to eliminate a threat to their clan. But when that threat turns out to be mostly human women, clueless of their lineage, plans change—especially after Drantos gets a taste of Dusti’s blood. Now, he’ll die to protect her. Even if that means walking away from everything he knows to keep her at his side.
Is her strong desire for Drantos reason enough to endure danger coming from all sides? Or should Dusti cut and run the first chance she gets?
Author Note: VLG stands for Vampires, Lycans, Gargoyles…and breeds in between. Living in Alaska’s harsh, pristine territories, these creatures live and love fiercely. These are their stories.

Overall Rating: 4.5 Rockin’ ★★★★☆
Have you ever wondered what would happen if you crossed a vampire with a lycan or even a lycan with a Gargoyle?  Well wonder no more because the vivid imagination of the amazing Laurann Dohner has created a world of others that will answer all your questions. Vampires, Lycans, Gargoyles and their half-breeds are the basis for Laurann Dohner’s new series VLG.  Through her eyes we are introduced to a brand-new interpretation of others in Drantos, a paranormal romance novel.  Drantos is fast-paced with unexpected twists and turns that are completely unforeseen.  It begins with a plane crash in the wilds of Alaska.  In this story Dusti and Drantos, the story’s principal couple, fights their initial attraction to one another.   However, as we all know resistance is futile in Ms. Dohner’s books.  This is their journey in finding love, acceptance and happily ever after.

I’m always searching for a new perspective on classic paranormal folklore.  When Ms. Dohner announced her new series, I was excited and as I read the story I was not disappointed with her fresh take on paranormal legend and the beings she created.  The world she produced is complex and intriguing.  Dusti and her sister Batina lost their parents and their only living relative is their estranged grandfather.  Dusti never liked or trusted him.  He treated her with distain, yet when Batina hears he is dying, she wants to try to be there for him.  The moment they are on the plane their destiny is change forever.  Secrets unfold as the hidden past is revealed and lives will be at stake!

I could not put this book down, and it’s not a short read.  The concept and characters along with the world they inhabit is masterfully fashioned by this master storyteller. It kept me enthralled and longing for more. The suspense, drama and mystery are enough to keep you reading, but the simmering and smoldering sexual intensity between the characters will have you panting until the end.  I’m looking forward to reading Batina and Kraven’s story.  Fabulous addition to my library!