Review of Pandemonium (MC Sinners Next Generation #1) by Bella Jewel 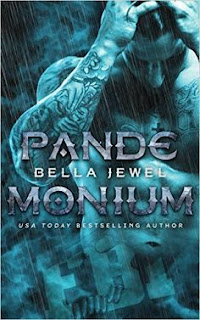 I am the good girl, the one who does no wrong.
Daughter to a ferocious and strong MC President, I know what protection feels like.
Until one night changes everything - and not a single person in the world can protect me from it, not even my dad.
Suffocating. Alone. Desperate.
I let my problems live deep inside until there is no longer anywhere to run.
I need an escape. Anything to make the pain go away.
Trouble comes for me, and I don't fight it.
I tried so hard to believe in what I was,
But nobody understood.
Not until him. Not until Lucas.
He sees me. He believes in me.
He refuses to let me drown.
He’s my way out. My escape.
But Lucas is forbidden. He’s a cop. I’m in danger. And my father is trying to protect what can’t be protected.
There can only be one outcome.
Pandemonium.

As a huge fan of Bella Jewel’s MC Sinners series, my eagerness to read Pandemonium was off the charts, so when I opened my kindle to find it waiting for me I devoured every single word, on every single page!  The gang from her previous MC Sinners series are older now, but in no way are they less because of their age.  Yes, they have grown children, but their bad-assery is still there and we are introduced to new characters that share that trait as well.  This is Ava and Lucas’ story about love, forgiveness and moving forward even when life shattering events happen.Ava is the only child of Jackson and Serenity (main couple from MC Sinners book 3).  She is 24 now with a well paying job although her boss gives her the creeps and a wonderful family that adores her.  When a rival of the club kidnaps Ava, her life is thrown into a downward spiral from it.  She doesn’t know how to cope and it causes her serious problems. But her knight in shining armor, won’t let her drown…not without a fight.  Lucas “Shadow” Black is a cop by trade and while he is on his daily jog he finds a crumpled, groaning kid beaten severely.  From that moment, his life is changed.  He has lost so much during his lifetime and the emptiness is prevalent in his life, he uses his job to help forget it.  He submerges himself in his work as a detective trying not to live in the past and when he meets Ava he wants to help her through the nightmare she is living in.I highly recommend you read Pandemonium! With the back and forth perspectives of the main characters that include past and future happenings, you are drawn into their lives.  You feel their plight with every word and you yearn for their happiness after such tragedy.  The struggle is real for them and you feel every moment.  I cannot say enough about how much this book grabbed me and held onto me even after I was finished.  The emotions, Ms. Jewel evokes are strong and lasting.  I cannot wait to read what happens next with the other grown children of Spike and Ciara, and Cade and Addison