Enter to Win a
Print Copy of INTO THE FURY 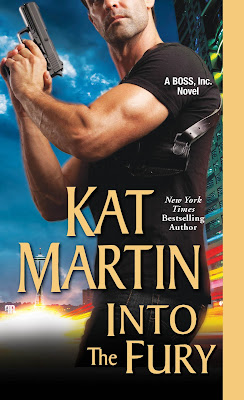 A bodyguard, a bounty hunter, a P.I.--the men of Brodie Operations Security Service, Inc. are down for the job. . .

Sinners, whores, and sluts beware--your time is at hand: a faceless menace is threatening lingerie models on a cross country tour, and Ethan Brodie is there to defend and protect.

Ethan's learned the hard way that beauty is no substitute for character. So even though Valentine Hart is one of the most breathtaking women he's ever seen, he's keeping his hands off and his eyes open. Or that's what he tells himself.

Then one of the models is murdered, and the closer Ethan gets to the answers, the closer he finds himself to Valentine--and the hotter the pressure feels. There's more to Val--more to the other girls--than he could have guessed. But one is keeping a secret that could kill them all.

What man alive would not want to be the bodyguard for sexy, hot lingerie models? A man that has been betrayed by a beautiful woman and left with a hands off attitude toward all women, that’s who!  In Kat Martin’s awe-inspiring new series BOSS, Inc. Book one, Into the Fury not only does Ms. Martin address that issue but she weaves a tale of romantic suspense that will keep you turning pages to find out what happens next.  This novel is action packed, drama filled, sexually tense and in the end, a happy ending for our main characters.  Valentine and Ethan are not your typical beautiful people and neither is their story!
Ethan Brodie has had enough!  His ex is giving him grief by keeping his precious daughter from him and refusing his parental rights out of nothing by vindictiveness.  When he is assigned as bodyguard to a bunch of high maintenance women that have received death threats, he is not a happy man.  However the more he observes and gets to know one certain model, Valentine Hart, the more he wonders if he may be wrong about her.
She needed this job, it was her way to finish veterinarian school and follow her dream.  When disturbing notes were sent to the top ten models of the agency she worked for, fear became a new accessory for her and nine other models.  Ethan Brodie was hired to provide additional security and to find the culprit behind the threats.  Val was instantly aware of the incredibly sexy man and it became hard to think of him as only someone hired to protect her.

Can there be more for the bodyguard and the model?  As the story unfolds and the danger escalates, the only thing that Val and Ethan can hold onto is each other.  This is an excellent addition to my library and is a story you will not want to miss! 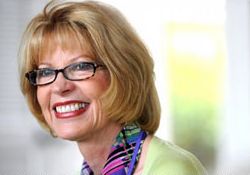 Kat Martin is the author of twenty-one Historical and Contemporary Romance novels. She tackles many different aspects of her genre with settings ranging from the rugged West to the Antebellum South, Regency, Georgian, and Medieval England. Not one to shy away from change, she also tackles Contemporary Romantic Suspense novels which involve the paranormal. Some of her titles include Nothing But Velvet, Sweet Vengeance, and Dangerous Passions. These works have won a bevy of awards including a recent Romantic Times Magazine nomination for Best Historical Romance of 1998 for her latest release, Wicked Promise. She is also published in, among others, Germany, Norway, Sweden, China, Russia, and Spain.

Before starting her writing career in 1985, Kat was a real estate broker. During that time, she met her husband, Larry Jay Martin, also a Kensington author. After double majoring in Anthropology and History at the University of California at Santa Barbara, she found herself incredibly interested in the past. In fact, she and Larry often do research in the areas where their books take place. She remarks, "We like to stay in out-of-the-way inns and houses built in times past. It's fun and it gives a wonderful sense of a bygone era."

In May, Kat will release her next Historical Romance, Night Secrets. Following that is an upcoming Zebra release, a Contemporary Romantic Suspense entitled The Silent Rose, which will be out in August. "It's a ghostly tale of romance and intrigue that was based on a real life incident," says Kat. "It's a little bit scary, a whole lot sexy, and hopefully lots of fun to read."

INTO THE WHIRLWIND
Available for Pre-Order 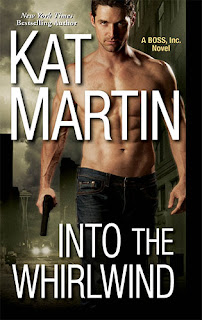