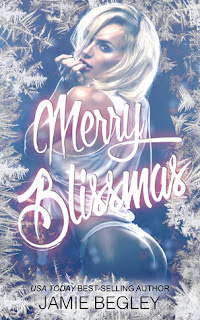 Naughty
What can I say? I’m not a nice person. When I walk by, people call me a slut, and I’m okay with that. I believe in calling a spade a spade. I am a slut.

With the holidays approaching, I miss belonging to The Last Riders. Drake’s keeping me warm, but he wants more than I can give. He wants me to trust him, to believe he can protect me. Doesn’t he know Santa put me on the Naughty List long ago?

Nice
What can I say? I’m a nice guy and have always done the responsible thing.

Bliss is everything I shouldn’t want, but it’s hard to resist a woman who stopped believing in miracles. She wants to be back with The Last Riders, whom she considers her true family. Doesn’t she know it’s Christmas, and miracles do happen?

When is a really bad girl, a good girl? In Jamie Begley’s Merry Blissmas you will meet a biker bitch that really is more than what she appears to be! This is Ms. Begley’s third book in her Biker Bitches series and she could not have selected a better leading character than Bliss! When you add in an unexpected local bad boy, Drake Hall things are really going to sizzle with sexual tension and heated dialogue.

Her life had been filled with betrayals, people using her for their own purposes and no one that really cared enough to protect her.  Everything changed for Bliss when she was rescued from her living nightmare by the Last Riders MC. They gave her a home, protection and safety, well until she couldn’t contain her inner bitch.  Now Bliss finds herself on her own again, without the club’s support.  It’s only a matter of time until her past catches up with her again.  When an extremely sexy male steps in and lays his claim, she doesn’t believe that anything good could happen to her!  Can this be real, is he real?

He has watched her from afar because she belonged to the Last Riders MC, but now all bets are off since she left the club.  Drake is not about to stop until Bliss belongs to him, after all he is a Porter.  However, he is finding it is difficult getting Bliss to accept him and the protection he is offering.  Is she still yearning for the club?  This is the season for miracles, so maybe there is one for him and Bliss.

When I started this book, my perception of Bliss was such that I really hesitated to read this book.  However, I really love Jamie Begley and have never been disappointed with any of her books.  As I read this story, it impressed me with the depth each character and the development of the storyline.  By the end of the book, I fell in love with Bliss and Drake!  Fantastic addition to my library.