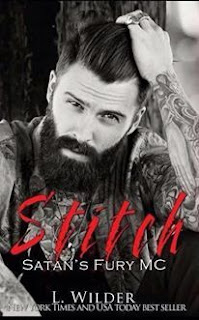 Stitch As the club Enforcer, Stitch is the man chosen to protect the club. There are no limits to his brutality, no lines drawn in the sand. The club is his life, and he’ll do whatever it takes to keep his brothers safe. He’s a man who keeps to himself, guarding the walls that he secured so long ago. Then, one moment, one chance meeting, changes everything. Wren Life for Wren and her son, Wyatt, isn’t exactly easy. Yet, Wren faces each day with determination and courage. Wyatt is her joy and motivation; for him, she will find a way to make their lives better, even when obstacles are continually thrown in her path. The last thing she needs is another complication, but what is life without hurdles to overcome? Stitch appears when they need him the most, protecting them when no one else can. Wren can’t understand it. She should feel threatened by his bulging muscles and menacing tattoos, but she’s somehow able to see past the mysterious biker to the man inside. She is drawn to him for reasons she can’t even begin to comprehend. All she knows is that her body craves his touch.

Can Stitch let his guard down and allow these two strangers into his heart? Can Wren see beyond the scars of her past long enough to let him in, or will her fear drive him away?

Evil can appear in many forms, but you would never expect it to come from a loved one, a family member!  Someone, that is supposed to protect and keep you safe from harm.  Ms. Wilder never ceases to amaze me with her ability to not only tell a story, but also to totally engage her reader into the world of her characters.  In Stitch, a book from the Satan’s Fury MC Series, she delves into issues that not only touch the life blood of families but also the plight of unprotected children. Be ready to be moved as you read this couple’s emotional love story. This is Stitch and Wren's story as they create a forever together!

It is bad enough to lose your family, but when you not only lose them and you are given to a monster to raise ,life becomes all about survival. Stitch is a man that has learned to survive anything and everything thrown at him.  He can endure pain, and as his clubs enforcer he can dish it out as needed to anyone needing to be taught a lesson.  Stitch is not a soft man; he is a survivor and finding his place as a brother in the Satan’s Fury MC saved him.  However, meeting Wren and her son Wyatt redeemed him!

Locked in an abusive relationship, Wren finally had enough when she recognized the danger to her son.  Forced to allow her ex supervised visitation with their son, she is in a constant state of fear.  Wren knows that it is only a matter of time before he loses control and harms Wyatt.  When Wyatt runs away from his father’s house the last thing Wren expects is the roughneck, bad boy that finds and protects him.  There is something about Stitch that makes her feel safe.  Can she trust him to keep her and Wyatt safe? He is not a man that trust easily and guards his heart.  Will he let her in?

If you are searching for an intense, yet sensitive story of love, life and eventually a happily ever after, look no more.  This book will keep you engaged, entertained and wanting to find out what will happen next.  Excellent addition to any library, I  know it is to mine!