The Good, the Bad, and the Vampire (Dead in the City, #4) by Sara Humphreys 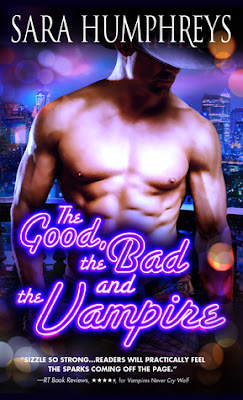 Beloved author Sara Humphreys' acclaimed paranormal romance series continues with sweltering attraction between two vampires who have all the time in the world to satisfy their desires...

He wants eternity?
Dakota Shelton is a vampire cowboy with a penchant for cinnamon lollipops and Johnny Cash. Though highly skilled and deadly dangerous to his enemies, he's still a Texas good ol' boy at heart. And he has that heart set on wooing Trixie LaRoux-the most badass punk rock chick in town-the old-fashioned way.

Over her undead body...
Trixie is tough as nails and sharp as a silver stake-the last thing she wants is a man to sit on a porch and not grow old with. So it'll take going to hell and back fighting a new threat to vampires before she admits Dakota's courtship makes her blood hum. Turns out chivalry's not dead after all.

What happens when two equal but opposite forces collide? You get the beginning of an intensely hot, happily ever after romance, Vampire style!  In Sara Humphreys' fourth book in her Dead in the City Series, a story unfolds involving Vampires, Werewolves, Gargoyles, Demons, Witches and Humans that hits a new level in paranormal romance! The Good The Bad & The Vampire weaves an unforgettable tale of fated mates, Trixie LaRoux and Dakota Shelton that stretches known folk legend.  There are so many twist, turns and kink through out this novel that the turn of the page can introduce something new and unexpected.
They have known each other for two years and are young in vampire years!  He is a cowboy and she is punk rock and they are vampires.  Both admit to themselves that they are attracted to the other, but are unwilling to act on it.  When it is discovered that they are Bloodmates, Trixie refuses to give into being controlled.  She has been there and done that in her human life and swears never again.  Trixie has secrets however, that she has kept hidden, secrets that are slowly eating her alive.  Things are not always as they appear to be as Dakota is finding out and maybe the things he believed about himself is also not true.  Can you deny your destiny?
When a species that was thought extinct suddenly reappear in a violent and horrific act lives will be changed forever as truths once known are proved false.  Lines will blur as a fight explodes between the good, the bad and the vampires.  Love will be tested and relationships strengthened in Ms. Humphreys latest release!  You will not want to miss adding this book to your paranormal romance library.