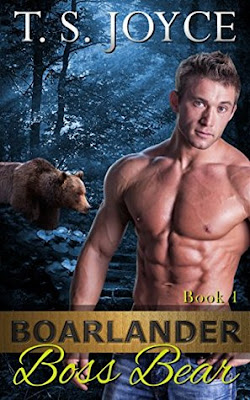 ***The Boarlander Bears can be read as a standalone series*** Audrey Foster is a shifter among humans. Forced to register her animal side to the public and desperate to meet other shifters like herself, she finds love on a matchmaking site with the big, brawler, alpha grizzly of the Boarlander Crew. She leaves her small hometown destined for a face-to-face meeting with Harrison Lang that will change her life forever. The only problem is he doesn’t seem to realize they are dating, and now his crew is on the defense, trying to keep her from getting too close to their secret life up in the wilds of Damon’s Mountains. Harrison has no time for the crazy woman at the bar who seems to think she knows him. His crew of lumberjack bear shifters is falling apart around him, and he’s making desperate moves to save what’s left of his trailer park. The last thing he needs is some human sticking her nose where it doesn’t belong. Too bad he can’t stop thinking about her, and now the mysterious beauty has him considering big changes for Boarland Mobile Park. Audrey wants a big boss bear, but she’s in way over her head, because the Boarlanders are not what they seem. Watch out Gray Backs…there’s a new C-team in town. Content Warning: Explicit love scenes, naughty language, and piles of sexy shifter secrets. Intended for mature audiences.

Overall Rating:  4.5 Rockin’ ★★★★☆
A new trailer park with new shifters and a new lumberjack crew equals a hell of a lot of laughter, action and steamy romance as we travel to the wilds of Colorado and the Boarlander Mobile Park.  Where we meet the new C-Team on Damon’s Mountains in the marvelously talented T.S. Joyce’s, Boarlander Boss Bear story.  We are introduced to Audrey and Harrison and accompany them on their journey to find happiness and love, while being plagued by Clinton and his restless bear!

The Boarlander crew are a hodgepodge of characters from Damon’s Mountains and each one has a story waiting to be told.  Clinton, Bash, Mason, and Kirk along with their alpha Harrison complete the crew.  They’re in for a big surprise when Audrey shows up on shifter’s night at the local bar to see Harrison.  He thinks she a little cray-cray but his bear is interested in the smoking hot kiss they share.  Their animals recognize their mates as their human sides war.

Another thoroughly enjoyable and highly entertaining read from T.S. Joyce that is sure to enhance your paranormal library!  Her books evoke so many emotions from a heartfelt moment shared between two unlikely foes to a toe-curling and naughty moment between Harrison and Audrey as she learns to accept her animal.  I’m so looking forward to reading her next book in this series and truly recommend you give her books a try.