Review of Jax (The Protectors #8) by Teresa Gabelman 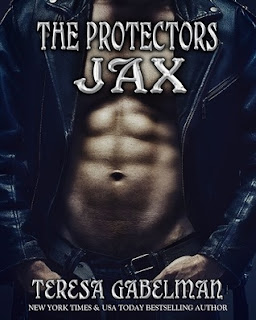 Jax Wheeler has been fighting his own demons for as long as he can remember. One of those demons is from his past, a brother who wants nothing more to see Jax suffer. Working closely with the Cincinnati Branch of the VC Warriors Jax never thought he would find someone who could help him ease his pain, but he was wrong.

Having a past of her own, Caroline Fitzpatrick has survived being put into a trance by a madman who wanted to control her sister, a abusive relationship, communicating with the dead, but nothing has prepared her for Jax Wheeler. From the moment she saw him the attraction was immediate, but the attraction was not mutual or was it?

The more Jax tries to stay away from Caroline, the more he finds himself at her door, in her life. All he knows is that every minute he spends with the beautiful school teacher, the more danger he puts her in. His brother’s vengeance of wanting him to suffer has put Caroline in the line of fire and only Jax can protect her.

Hot vampire warriors, shifters, human psychics and necromancy pull the reader into the paranormal world of Teresa Gabelman. In her eight book in The Protectors series, Ms. Gabelman continues the story of Caroline Fitzpatrick and Jax Wheeler.  The couple were introduced in a previous book in this series and their relationship started on shaky ground.  As an avid fan of Ms. Gabelman, I have been anxiously anticipating the arrival of this book and it did not disappoint me.

Jax is a Native American vampire/shifter.  His life has been spent trying to keep those he cares about safe from his psychotic brother, a brother that wants to make Jax suffer any way he can!  That includes killing those that he cares about.  He thought he had found a place where he could stay and be a part of the VC Warriors, but once again his brother rears his evil head.  To add to his angst, Jax has finally found a woman that he wants to get to know, speed time with and she maybe his mate!  How can he with the threat of his brother hanging over his head?

The dead follow her and sometimes talk to her!  Caroline and her sister not only see the dead but can also communicate with them.  From the first time she laid eyes on Jax, Caroline knew he was meant for her.  But he continues to keep her at arms length and seems to ran whenever she get close.  An unsettling dream has Caroline scrambling to understand what it means and who the boy is that keeps appearing when she least expects it.  What is he trying to tell her?  Is her dream a premonition of things to come, can she prevent it?

The world of the VC Warriors just became a little more intriguing with the addition of new characters as well as old friends!  As usual the storyline is fascinating with kinks, twist and turns that reveal the uniquely talented vision Ms. Gabelman created with this series.  I cannot wait to see where she will take the Warriors next!  This is an excellent addition to my library and is a must read for any lover of paranormal romance!