Review of Resisting the Moon (Royal Shifters #2) by L.P. Dover 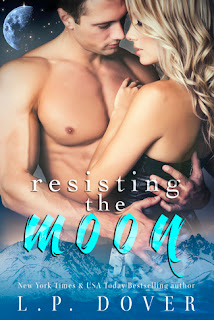 The past was pain.
The present unclear.
For Tyla Rand, her future couldn’t be bleaker. Death follows her everywhere, especially to those she loves. Being a member of the royal pack, she believes her time of happiness will come. That is, until wolves from her old pack show up missing. Her mission is to find them, but she won’t be going alone.
Sebastian Lyall, a true born royal and the one man Tyla loathes, has offered to help in her quest. Their journey not only brings out their true desires, but attracts the attention of another, someone from Tyla’s past. However, nothing is as it seems. Death is not done with her and now he wants her to pay. He won’t be satisfied until he’s taken everything away . . . including those she loves.

Evil knows no boundaries and feels no remorse for the destruction and havoc it inflicts.  In Resisting the Moon, A Royal shifters novel by the incredibly talented L.P Dover, she exposes the reader to true evil and at the same time the beauty of timeless love.  This action packed drama is filled with intense sensual dialogue and heated sexual interludes between her main characters.  This is so much more than a paranormal romance or a suspense filled narrative. Tyla and Sebastian story will keep you reading until the last page as they find their way to forever love!

Everyone she ever loved was taken away from her, her human lover, her alpha that she had agree to mate with and now her true mate!  Tyla Rand refuses to open her heart and take a chance, even with her true mate.  She knows that Sebastian Lyall is her mate, the other part of her soul but he is a man whore and Tyla cannot handle his rejection. Life continues to throw her a curve when she is sent on a mission to rescue a family member and Sebastian is sent with her. Can she take a chance and open herself up again?

He is a protector, sworn to protect his species and now his true mate.  The only problem he has is getting past the barriers that Tyla has erected around her heart and convince her that he is her true mate.  It doesn't help that she believes he is a womanizer.  He has to claim his mate or the consequences will be devastating.  When one of Tyla's family calls, frightened and asking for help, he is happy to go with her to find her missing cousin.  Neither of them expect what they find or who is behind the kidnapping.  It will take all they can do as a team to survive what is waiting for them!

As I read this amazing novel, I was filled with admiration for this remarkable writer.  Her characters are intertwined with the storyline in a way that adds to the depth of the plot.  Each character is an integral part of the action that takes place and adds an extra layer.  This is a wonderful addition to my library and a book that I will reread over and over!