Review of A Covert Affair (Deadly Ops #5) by Katie Reus 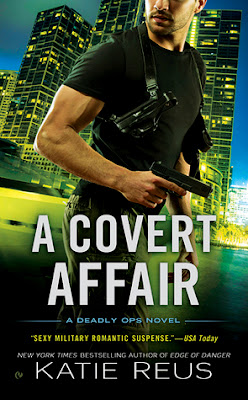 After being wounded in action, NSA agent Nathan Ortiz comes home to Miami, eager to return to duty. But he doesn't expect his newest mission to lead him straight to the one woman he loved, lost, and has never gotten over.

A beautiful, successful restaurateur, Amelia Rios enjoys giving back to her community, especially to struggling women. Then a woman she recently hired stops showing up for work, and, unfortunately, she isn’t the first to go missing.

Soon Amelia finds herself thrust into a shadowy, dark world, working side by side with Nathan, the only man she’s ever loved. They must confront old feelings as they battle a ruthless enemy preying on the poor and weak. The heat simmering between Nathan and Amelia could mean a second chance for them—but first they have to survive.

Young women are disappearing in the Miami area!  Are they part of a human trafficking ring or something more diabolical? Katie Reus, the queen of romantic suspense has once again created an action packed, sensual read that will keep the reader on the edge of their seat! In her new release, A Covert Affair she uses some characters from previous Deadly Ops Novels and introduces some new ones to weave a story of intrigue, drama and suspense.  If you enjoy a good ‘who done it’ then you will love this engrossing mystery.
There has only been one woman that he could never forget.  A woman so determined and self-directed that you cannot help but admire her accomplishments.   He walked away from her years ago, but has regretted it ever since.  Now she is once again in his life.  NSA agent Nathan Ortiz has been sent back to his hometown, Miami to investigate the disappearance of young women in the area.  On his list of possible people of interest is Amelia Rios, his lost love. No way would this woman be a part of something like selling other women into slavery.  Is this his second chance?
Her entire life has been about pulling herself up out of life she was born into.  Amelia has worked to create a new life for herself.  She is now the owner of two successful restaurants in Miami and is a respected member of her community.  There is however, one regret, Nathan Ortiz.  He was her first love and the man she has never been able to replace in he heart.  Now he is back and life just took on a dangerous vibe, someone wants to hurt her and young women that have worked in her restaurants are coming up missing!  Will Amelia finally confront her past and reveal her secret to Nathan?
There is more involved than just reuniting to star crossed lovers!  Someone is out there stalking, kidnapping and making young women disappear.  Nathan and Amelia will work together to find out who and what is going on.  Excellent read and I look forward to reading more by this talented author.