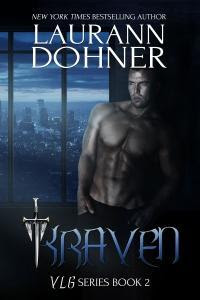 Batina Dawson wants two things most in her life. She’s determined to become a partner at her law firm and secure her younger sister’s financial future. That’s why she talked Dusti into flying to Alaska, to mend fences with their terminally ill, rich grandfather. It seemed to be a perfect plan—until things go wrong.

The plane crashes and their lives are saved by two large, muscled brothers. Kraven is a spiked-haired menace with a handsome face and a killer body. He also believes she’s in danger from her own grandfather, and that Vampires and Lycans once bred, making him a VampLycan. He even claims her mother was one too. He may have kidnapped Bat, but his misguided hero complex is almost sweet. She knows exactly what defense she’ll use if he becomes one of her clients. Insanity.

Kraven is frustrated. Bat refuses to stop arguing with him at every opportunity. She’s stubborn, mouthy, and oh so sexy. She might be right when she accuses him of being crazy—she’s driving him nuts. But she’s in danger and he’ll stop at nothing to keep her safe.


Author Note: VLG stands for Vampires, Lycans, Gargoyles…and breeds in between. Living in Alaska’s harsh, pristine territories, these creatures live and love fiercely. These are their stories.

Batina and Kraven’s journey begins like their siblings, Drantos and Dusti, with a plane crashing in the wilds of Alaska, but that’s where the similarities end. Laurann Dohner thrills her readers with the next book in her VLG (Vampire, Lycans, & Gargoyles) series, Kraven.  It gives the main couple’s perspective of the plane crash and the happenings that occur after.  Spine-tingling action, unforeseen twists and turns and steamy panty-melting scenes between our couple makes this a must read for me.She drives him batty isn’t that ironic that her nickname is Bat, short for Batina Dawson.  She is a force to reckon with.  Attorney by trade, big sister to Dusti and now running for her life from her crazed grandfather.  Kraven is an alpha to the max.  He demands and people jump to follow his orders.  As an enforcer he knows the laws of his people and ensures they are followed.  When he is ordered with his brother to intercept the Dawson sisters, he had no idea that his life would be changed forever.My anticipation held me captive throughout the story as I grasped the uncertainty and vulnerability from both characters.  Each had been dealt strong blows from the opposite sex and trusting or having faith that they wouldn’t be hurt again, surfaced many times.  They battle their way through and find their happily ever after, but not without trouble and struggles.  The introduction of Lorn, as a possible candidate as a replacement for Decker Filmore (Bat's grandfather) over his clan was an interesting tidbit that setup the next possible book in the series.  Lorn is mysterious and I cannot wait to read his story!